We twa hae run about the braes

And pu’d the gowans fine;

This is an original verse from the song “Auld Lang Syne” that’s sung around the world at New Year celebrations. Don’t worry if you had a hard time following – your English skills are just fine. In fact, most native English speakers couldn’t say what most of it means as it’s written in old Scottish dialect.

So how did this tune originally full of strange words that nobody understands become an international standard? In large part, it’s thanks to a promiscuous, hard-drinking Scottish poet of the late 18th century by the name of Robert Burns. 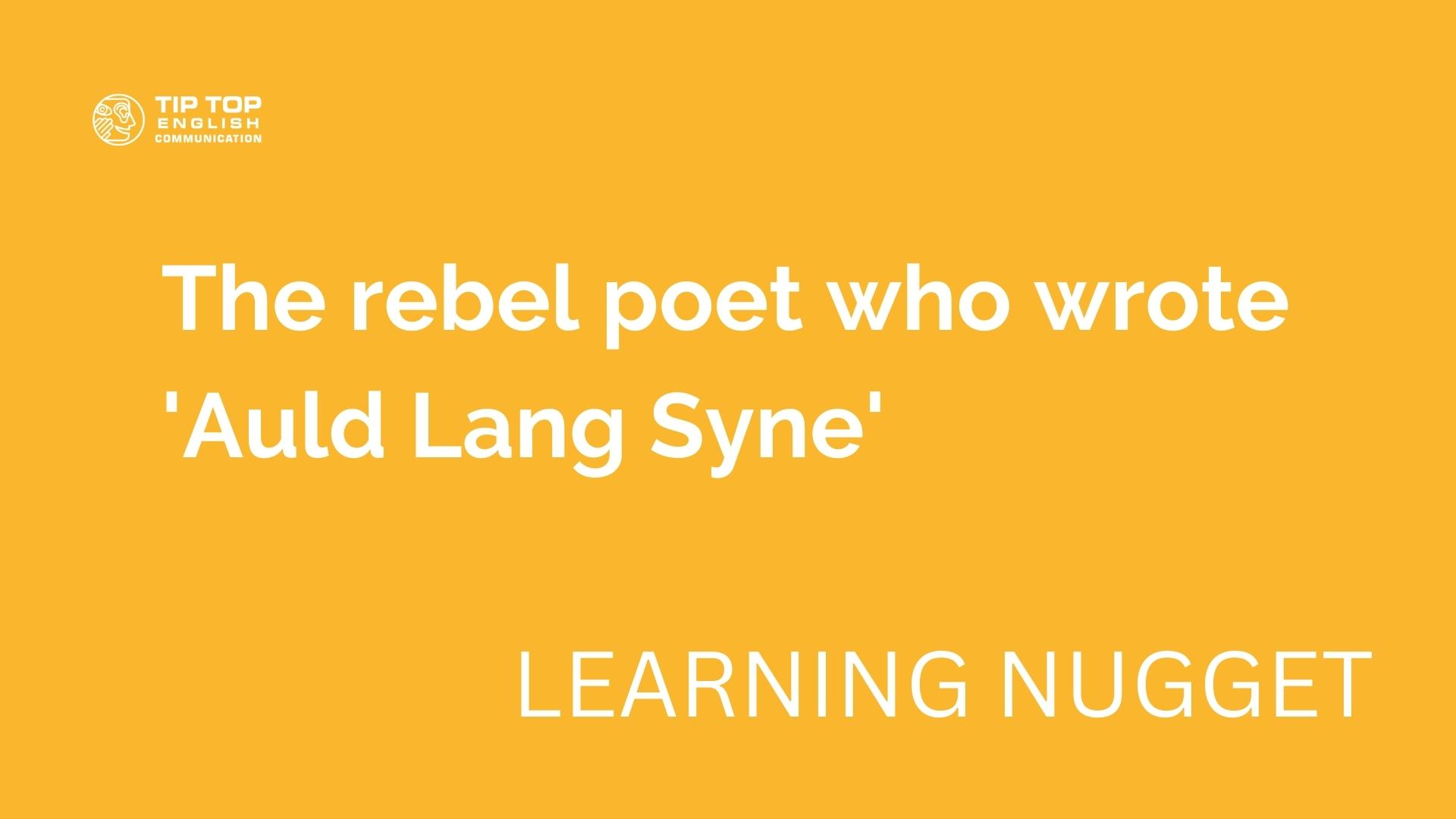 Burns was born on January 25, 1759, in the Ayrshire region on Scotland’s west coast. He was the first of seven children in a poor farming family.

They didn’t have much, but Burns’ parents encouraged their eldest child‘s education as much as they could. He learned to read and eventually fell in love with poetry. He also had passions for Scottish folk tales and songs, local dialect, and a number of women.

When Burns’ father died in 1784, Burns had already fathered a child out of wedlock (he’d go on to have 12 more children with various women), and he found himself responsible for running the family farm. The next two years were a blur of great disappointment and huge triumph.

During that time, Burns tried to marry a woman named Jean Armour with whom he was also expecting a child, but her father forced her to back out. Additionally, he wasn’t making any profit from the farm, and bankruptcy seemed imminent. Various sources say that at this point Burns wanted to leave Scotland to start a new life in the Caribbean (possibly with a new flame named Mary Campbell) and hoped he could make enough money from a collection of poems he’d been working on to fund the move.

However, when he released Poems, Chiefly in the Scottish Dialect, it was a bigger hit than he could ever have imagined. The collection mixed the language and perspectives of the common Scot with high-brow poetic structures, forms, and concepts he’d picked up from reading literary classics, and it won over countryfolk and academics alike.

The book’s success led the country-raised Burns to spend time in Scotland’s most important city, Edinburgh, where he was a celebrated guest among members of high society.

Though there are plenty of stories of Burns’ womanizing in Edinburgh, he married his former sweetheart Jean Armour in 1788. They, with many of his children (including the twins Jean had had after leaving Burns previously), moved to a farm in the countryside. Again, Burns failed at farming, but he eventually found work as a tax collector that he was good at.

During this era, he became interested in gathering traditional Scottish songs, and this became his literary passion throughout the last years of his life.

Burns died in 1797 at age 37. He died due to a heart condition that his heavy alcohol consumption had worsened, and his last child was born on the day of his funeral. Despite releasing just one hit book of poems as well as a beloved narrative poem called “Tam o’ Shanter,” many people name Burns the national poet of Scotland.

How “Auld Lang Syne” got so big

“Auld Lang Syne” first appeared in a collection of Scottish songs published by George Thomson. Because Thomson found some original lyrics of Scottish folk songs too unrefined or scandalous, he hired poets like Burns to create versions that suited his tastes better.

Burns sent a copy of “Auld Lang Syne” to Thomson in 1788 and said it was a well-known Scottish song that no one had written down before. However, whether the lyrics came mostly out of Burns’ mind or were truly from a Scottish tune passed down orally for decades isn’t truly known.

The melody we all know first appeared with the song in 1799, two years after Burns’ death, and it didn’t take long to catch on and spread. According to an article from the BBC, “the song’s initial popularity coincided with the age of Scottish emigration, especially to Canada and the US, in the 19th Century.” In those new countries, Scots continued to sing “Auld Lang Syne,” and its fame grew.

A big band leader named Guy Lombardo is credited with connecting the tune to the New Year as his Royal Canadian Dance Band always ended its long-running and extremely popular New Year’s concert with it. He once told Time magazine that it wasn’t something he really thought about as in western Ontario, Canada, where he got his start, nearly every band played it to end the night.

Today, the song rings in the New Year all over the English-speaking world. In the U.K., there’s a tradition of standing in a circle while crossing arms over chests and holding neighbors’ hands before rushing in to the circle’s center when the song ends.

Take a cup of kindness

Before we go, we want to make sure no auld acquaintance be forgot and wish you all a happy New Year! We have some great things planned for TIP TOP in 2023, and you can get a glimpse of them on our freshly redesigned website.

back out – zurücktreten, sich zurückziehen

get a glimpse on – flüchtigen Blick werfen auf