The Great Wall of China? The Pyramids of Giza? No! It’s Liverpool! 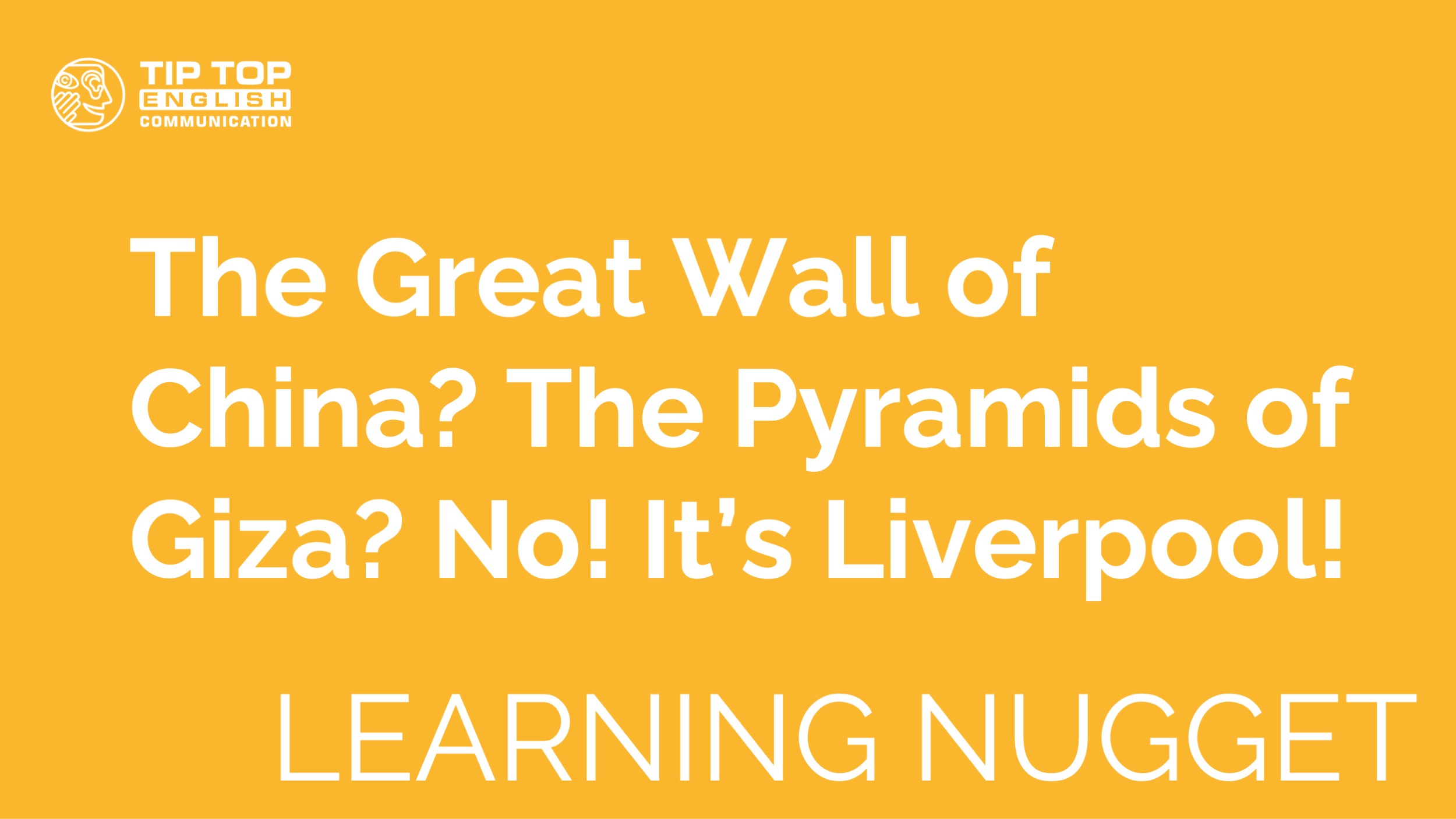 The name conjures up a thousand images – the Beatles, Liverpool football club, a glorious past as trading port and industrial city, not one, but two majestically different Cathedrals, scouse, fish and chips and of course the famous ferry across the Mersey.

Standing on the quay in Liverpool the seagulls crying, the cold wind off the Irish Sea ruffling your hair,gazing into the swirling grey waters of the River Mersey, you can imagine what this old city has seen and the stories it can tell. The smells, sights and sounds of tall sailing boats docking with spices, cotton and tobacco from the Caribbean in 1760. Emotional goodbyes as scruffy families left to find new beginnings in America – in the 19th century several million emigrants sailed from Liverpool to the rapidly developing “New World”. The names of men, women and children read out from a list of missing passengers, many from Liverpool, never to return after the Titantic’s fateful maiden voyage in 1912.

Like the Great Wall of China and the Pyramids of Giza, Liverpool is a UNESCO World Heritage Site. Over the past fifteen years the city has undergone a thrilling renaissance. The once bustling port area, which had become rundown and delapidated, has been transformed into a world class cultural centre with the best collection of museums and galleries outside London, including the Tate Gallery of Modern Art, The Merseyside Maritime Museum and the fantastic new Museum of Liverpool opened in 2011. The beautiful old red brick warehouses of the Albert Dock, the majestic Pier Head and Liver Buildings and the stunning modern architecture attract thousands of visitors every year bringing back life and laughter to Liverpool’s waterside. Alongside the museums, there are dozens of new shops, buzzing restaurants, hip hotels and trendy pubs where you can sit and enjoy a pint inside or outside, rain or shine.

The local people are known as Liverpudlians or “Scousers”. This is a reference to “scouse”, a tasty stew which was brought over by the Irish who emigrated to Liverpool in the 19th and 20th centuries. The word “scouse” is also used to describe the famous Liverpool accent which is often tricky for foreigners, made all the more difficult by a wicked sense of local humour! But in general people are polite, friendly and open and will often call total strangers “luv”, whether you’re a man or woman.

The name of the city, Liverpool, is thought to come from the Old English “lifer”, meaning thick or muddy water, and “pol”, meaning a pool or stream. Other origins of the name have been suggested, including “Elverpool”, a reference to the large number of eels in the Mersey, which once served as an important food source for local people.

Standing at the pierhead, watching the Mersey ferry boats come and go, you might look up to see the “Liverbirds” perched on top of the Royal Liver Building. The copper cormorant-like birds, turned green with verdigris in the moist sea air, are a symbol of the city and can be seen on the coat of arms and of course on the badge of Liverpool FC. According to popular legend, the birds are a male and female pair: the female looking out to sea, waiting for the seamen to return home safely, and the male looking in to the city, watching over the seamen’s families or “making sure that the pubs are open”, whichever version you wish to believe!

The thousands of migrants and sailors passing through the port of Liverpool resulted in a religious diversity that is still apparent today. The city is home to the oldest Black African community in Britain and the oldest Chinese community in Europe. Liverpool is also known to be England’s most Catholic city, due to the large number of Irish people who arrived and settled there.

Liverpool’s wealth as a port city enabled the construction of two enormous cathedrals. The Anglican Cathedral, which was designed by Sir Giles Gilbert Scott and, with a length of 189m, is the longest cathedral in the world and the more modern Roman Catholic Metropolitan Cathedral completed in 1967. The road running between the two cathedrals is called Hope Street, a coincidence which pleases believers. The Catholic Cathedral is affectionately known as “Paddy’s Wigwam” due to its shape and the large number of Irish in the congregation.

The Fab Four are probably one of Liverpool’s most famous exports. The band, founded in 1960, soared to fame with their charateristic mop-top hairstyles creating Beatlemania worldwide. If you’re in Liverpool you can pop into the original Cavern Club on Mathew Street where the Beatles first played, grab a beer and enjoy some live music. Or visit “The Beatles Story” a musical museum experience dedicated to the band. And you can still hug Ringo, Paul, John and George! There is a life-size bronze of the boys down by the Mersey.

Liverpool was home to both the Cunard and White Star Shipping Lines, which competed strongly in the 1920s for the Atlantic passenger route hoping to get the journey time from Southampton to New York down to under seven days. The Titanic was built by White Star and registered in Liverpool. She sailed from Southampton in April 1912 on her maiden voyage and was considered unsinkable. Everyone knows the tragic story of her collision with an iceberg in the North Atlantic where 1517 lives were lost in the icy water. You can find out all about the Titanic at the Merseyside Maritime Museum in Liverpool.

Another fascinating and sobering theme covered at the Maritime Museum is the slave trade. An excellent exhibition tells the history of Liverpool’s initial growth as a port in the 18th century based on the sinister triangular trade of goods and slaves. In Liverpool ships were loaded with textiles, guns, iron and alcohol. They sailed to Africa where they traded the goods for slaves, ivory and gold. They then continued to the Americas or the West Indies where the slaves were sold or exchanged for goods, such as sugar, coffee and tobacco. Throughout the entire period of the British slave trade, Liverpool’s ships delivered over one million slaves to the New World, although relatively few slaves ever came to Liverpool. This continued to be a lucrative business until “The Slave Trade Act” was passed in 1807 abolishing this cruel and brutal practice.

In the 19th century, Liverpool rose to become, after London, the second port of the British Empire and one of the greatest cities in the world. This was primarily due to her role as the main “western gateway” for the import of raw materials (cotton, coal, sugar, timber and grain) and the export of the finished goods of the industrial revolution, which was then taking place in the mills and factories of Lancashire, Yorkshire and the Midlands. Many of the majestic buildings you see on the waterfront, like the Royal Liver Building, were built by rich merchants, shipping companies and industrialists.

As you can see there is so much to learn and love about Liverpool – its remarkable history, culture and people – we could go on and on! So why not go to this beautiful and exciting city and discover the scouse and the Scousers for yourself!

It’s well worth a visit!